WWG recently ran an online Star Realms Legends Series Event, on June 20, 2020.  While there have been a couple online Legends events in the past (which were fan-run), this was WWG’s first official foray into the online tournament scene.

After the 7 Swiss rounds, a clear Top 8 emerged…no tie-breakers needed. 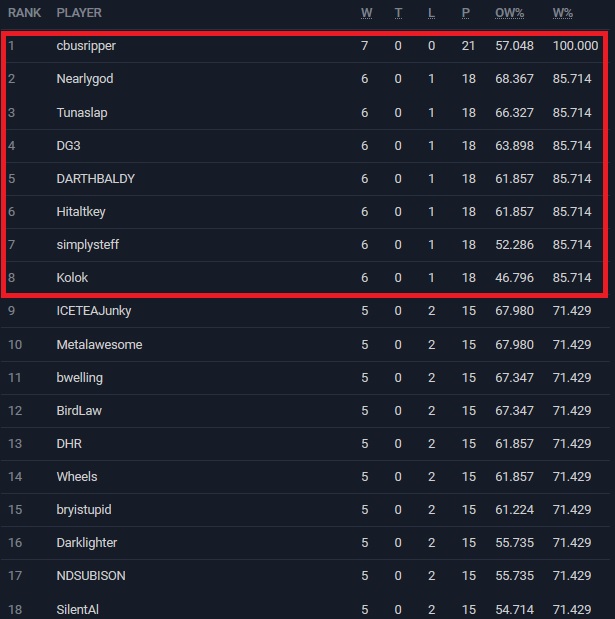 Notable facts about the Top 8:

Below are the results of that final stage.  The Top 8 played in a best-of-3, single elimination tournament.

Congrats to kolok, the newest Legend!

We look forward to seeing his likeness on a future card!

We reached out to kolok to get his thoughts on the tournament:

Have you participated in any Legends tournaments before?  If so, how did this one compare?

kolok: I played in the one held in conjunction with the BGG League a few years back. That was different in more ways than one, IMO it does not really make sense trying to compare the two. The BBG one was a multi-day event, with preliminary qualification, then a round robin stage, followed by the knockout stage, the latter consisted of best-of-3 matches I think.

What time was it your local time when the Tournament started, and finished?

Since the tournament went so late for you, did you get tired at all or have trouble staying awake? Or was it too intense for you to get tired?

kolok: I was totally exhausted. I said in the chat thread before the event that I found it pretty unbelievable having stage fright after almost 17k games played.

Did you have any specific strategy coming into the Tournament?

kolok: Survive the next game. 🙂

The tournament used Core Set, Colony Wars, and/or Frontiers.  Did you have a different approach when using each of these sets?  Did any of these sets concern you more than others?

kolok: Well, it’s been a long time I played a vanilla game and I indeed lost the very 1st game (a vanilla one). I think I have got used to having that extended arsenal the various expansions provide, and compared to those plethora of options, routes to victory in vanilla are somewhat limited. I don’t think I’ve ever played, like, WR either, that format has the potential for some sheer brutality.

Do you have a favorite between Core Set, Colony Wars, and Frontiers?  If so, why is your favorite?

kolok: Difficult question. I think all sets are fine, I have minor issues with each. The most balanced one is probably Frontiers, but pretty hilariously, it contains the fewest of my favorite cards.

How were you feeling after losing your first match, knowing you had to win the rest to get into the Top 8?

kolok: Business as usual. I do horribly in knock-out competitions.

In the swiss rounds, were there any memorable matches or turns?

kolok: The 1st game was pretty epic, my opp opened with Destroyer/Barter World vs my Cutter/Supply Bot, one of the strongest opens in vanilla. Who do you think ended up with Brain World and Command Ship? Well, I had no answer for that Barter World in deck2, true that. Despite that, I somehow still had a decent shot at winning, if not for my draw betraying me during endgame, that is.

In the Top 8, your first two matches were against Cbusripper and then DG3.  Were there any key moments in either of those matchups that you remember?

kolok: Vs Cbus initially it seemed that he would make short work of me. I was double Vipered in the 1st one, and it went downhill for me pretty fast from there. The 2nd one was more of a battle. Then came the 3rd, where we raced for big ships, when the dust settled I had Fed Battleship and Michael Hive Queen. And then Imperial Flagship, ouch. At a crucial juncture, I had to choose between Fed Cruiser vs Reclamation Station. I’m not sure it was the right choice but I went with the Blue workhorse, most of the time I don’t leave Reclamation Station there, but here I put my fate into the hands of the Federation. I was indeed almost killed by Wreck Station (as the community colloquial goes) before narrowly outlasting Cbus.
Vs DG3 the whole series gradually morphed into a whiff-fest, by both sides. We played the 1st 2 games simultaneously, and nearing the climax in both I was so sure of losing that messaged my opp on Battlefy “ggs”. Then in a few seconds I was shell-shocked to see that I’m still alive in both games! I ended up winning 2-1, the 3rd game was worthy of the previous two…

What about the Finals vs Hitaltkey…could you briefly describe that match, or at least mention some of the key moments?

kolok: In the first game I got all the Reds by favorable flips, combat ones, with Enforcer Mech among them, scrapped down quickly, and the TR didn’t provide really efficient tools for my opp to counter the Red rush. In the 2nd game I got lucky during endgame, they bottomdecked their Trade Escort, a turn before that I scrapped my Aging Battleship aggressively going for the early kill and this way I just got that (thanks to said bottomdecking by my opp  AND me not doing that with my combat). But I always consider being lucky in the first place just being able to pick up Aging Battleship, especially in a rush context. It’s almost a guaranteed win.

Anything you would add about your final match?

kolok: The luckier one won. 🙂

Overall, how do you feel WWG did with their first official online tournament?

kolok: Everything went smoothly, the whole event was a blast. I think there had been some worries with regards to Battlefy which was new to most of us (as the competitions run by the community usually utilize a different site) but I think it proved to be just fine. The sentiment among the players was pretty unanimous: let’s have this more often, could we?

Have you started thinking about your Legends card, such as preferred faction, preferred card type, or preferred ability?

Thanks for taking the time to share your thoughts!  Congrats again!