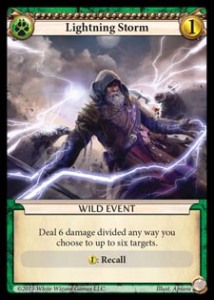 My team and I feel very good about Epic’s mechanics. We now have net decks, trial builds, and some that are in between. As we learn to pilot them correctly, we are really seeing them pop! The play feels much like old school Legacy Magic. ‘One Point Five Restricted’ was what we called the format at the time. Epic has allowed us to scratch that itch without spending thousands of dollars.

As we practice fundamentals and hone our timing, we are carefully shifting our focus toward selecting a deck.

“A sword never kills anybody; it is a tool in the killer’s hand.” ― Seneca

I discussed play with 4 decks from http://decks.epiccardgame.com/decklists/tournament in my last entry. These have become the foundation of our learning. Tom Sorenson’s Origins build and Martin Dickie’s Gencon deck are proving to prevail most consistently against the rest of our test field. Are these the weapons I should be considering for Boston?

I reached out to Sorenson via the Epic Facebook Fan Page. Tom was forthcoming, and seemed very willing to help a new player out. Not surprising, as he is active with the Epic community. He had already posted his post-Origins build. Tom has swapped out Evil splash for Sage, and has added targeted removal. He told me that previously he had a hard time dealing with Muses. http://decks.epiccardgame.com/decklist/view/86/combative-humans-post-origins-1.0

I also made contact with Martin Dickie. Interestingly it turns out I had met Martin at Gencon in August. Nice guy! He, too was receptive, and we chatted about changes he would make to the deck today. He too is looking at supplementing targeted damage, even though his deck is already loaded with it.

“You can figure out what the villain fears by his choice of weapons.” ― Connie Brockway, The Bridal Season

In competitive Magic we can draw conclusions about meta by observing recent sideboards. There is no sideboarding in Epic. We have results and player response. Two high level players just told me outright that they are boosting burn. Atop the most recent qualifier posted by Nathan Davis is a deck named ‘Big Burn’. Burn is Booming.

Two recent developments will factor heavily into my remaining preparation.

1. Big Burn did not just win a qualifier. Brian Batista and Daniel Velastegui designed and mastered this weapon as a team. Each took it to the recent Pandemonium Books Qualifier and wrecked the field with it. They met for a 60 card mirror match in the finals! This dominance cannot be ignored. Maybe this is the deck I have to learn and take with me.

2. Ummm. Okay did you watch the video? All the way through? At the end he has been allowed to spoil a new card from the Uprising expansion. Chamberlain Kark is RIDONK!! We have been told that we will have use of the new Uprising Expansion in the event. So now I will have to worry about an alternative win condition?! And from Life-gain?!

It will be difficult to assess Kark’s broad impact on Epic, much less on the Worlds Event in 3 weeks. If there is a winning Kark-based deck to be made, this field will find it. My team and I will have to attempt the same, even if just to test against it. What if it’s good? What if it’s reeeeally good? It’s already crazy to think that Worlds will be my very first taste of organized Epic. Wouldn’t taking a rogue build just further diminish my chances? 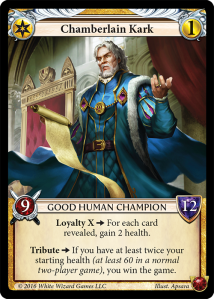